As the concepts of the “Metaverse” and “Decentralized Society” continues to take shape and evolve day by day, it becomes ever so important to try to tackle long-term problems in the now rather than see them manifest later. Tokens and various currencies have provided the community at large with a store of value and a medium of exchange. DAOs have been able to give a shape to communities and provide decentralized rules to ensure the productivity and longevity of a community.

However, the medium of identity in all these “transactions, especially ones related to cryptocurrency, takes place in the form of alphanumeric “keys” and “addresses”. However, the identity of the holder beyond his financial worth is not reflected in any of these concepts. While the anonymity aspect of all decentralized frameworks for finance and otherwise remains paramount, for the virtual decentralized world to truly decentralize all forms of interaction, formulating and manifesting an identity for a person to perceive, becomes an essential issue to be resolved.

Why is the concept of a Decentralized Identity important in the long run?

The primary function of identity in a general sense is to formulate a unique distinction between “one” and “others”. It is inherently interlinked to the concept of a “reputation”. A theoretical “You”, John Doe, or Jane Doe, stands today in the global collective consciousness as a function of your education, experiences, and actions throughout your life. These can manifest themselves in a myriad of forms.

These forms may be in a physical and discrete form, that is effortlessly perceived such as a degree, or a diploma. They may also manifest themselves in non-fungible forms like one’s networks and relationships with people. These human elements manifest because of where you live, where you studied, and as a result, you “run into people” and form relationships. It could even be an event like a conference or a seminar, where like-minded people meet, form relationships, and help each other out later at work or so on.

“Your Reputation Precedes you”

On a macro scale, trust and reputation are the core tenets of the functioning of any economy.

Reputation is a situation where “when agents believe a particular agent to be something.” A typical model features the conundrum of Adverse Selection; the notion that one is dealing with an unscrupulous party. The mechanism of reputation revolves around “signaling”. Small markers that show one is a trustable and competent party. This manifests in an individual’s skills and standing in “society”

In today’s world, getting hired often manifests in the shape of your qualifications syncing up with what your employer wants. This could be your degree from a university that the company may like or a credential related to a certain skill that the company desires. In a similar sense, having an identity in Web 3.0 may manifest in tokens or other entities “Backing your skills up” that are authenticated by the blockchain, as a degree would be issued by a proper university.

Every interaction and facet of one’s identity such as work, or qualifications is a bilateral affair for the most part. Unless you share it with a party with whom you are, exchanging a token, engaging in a smart contract, or interacting in the blockchain in some shape or form, there is no way for a third party to know your standing in this theoretical “society”. The primary issue becomes that of social “backing”. As the size of a community expands, so do the members of the community who choose to act in bad faith, and engage in unscrupulous behavior.

With the help of technology, it is easy to cut down such behavior in aspects like, say, bilateral financial transactions, where the “activity” is instant and simultaneous. However, as Blockchain tech continuously pushes the boundaries of what’s possible with concepts like Decentralized Autonomous Organizations (DAOs) and NFTs, it becomes even more important to ascertain the standing of community members who one interacts with to some degree.

Conceptually, an “identity” wallet acts as a “repository” of an entity’s identity. This wallet would generate the requisite public and private keys that may be required. Now, to defer “standing” and “qualification” to this wallet, issuers, that may be public or private, would upon verification of participation or qualification, add a hypothetical identifier to this digital identity data repository that confers the wallet a certain qualification or affiliation.

Sounds Good. How do we do this?

It may be nice to know that the technology for manifesting such concepts into a workable form is being realized, and constantly being worked upon. The Core Architecture of a Decentralized Identifier (DID) does exist. As the World Wide Web proposed recommendation regarding DID states, “It can refer to any subject such as a person, organization, thing, data model, abstract entity, etc.”. This potential of this technology can be realised with the help of the blockchain as it would be composed of a public key, verification information and service endpoints

A concept similar to this in spirit is that of Soul Bound Tokens, proposed by Vitalik Buterin in a recent whitepaper, that envisions non-transferable tokens that act as proof of your “reputation” on the blockchain. Conceptually, this could manifest as proof of one’s education, affiliation with a group, or even something as simple as having attended a seminar or a class.

Unlike DID, which is more of an identifier, capable of interoperability with other existing systems such as distributed ledgers, decentralized file systems, distributed databases, and peer-to-peer networks, SBTs are centered around a “wallet”, or a “Soul” that exists on the blockchain. The fundamental idea is that tokens accrued by a soul reflect their qualifications, skills, and affiliations.

Technologies such as these may very well be the gateway with which we may establish mechanisms that foster trust and manifest reputations, core concepts for the smooth functioning of any economic framework.

The endgame of Decentralized Society (DeSoc) is to create trust and community, on the blockchain, and the metaverse at large. As is with any close-knit community, trust creation and reputation fostering is of the utmost essence to ensure the minimization of bad actors. Reputations would permit interactions to occur where there may be none because of the general anonymity in the sphere of metaverse-related concepts.

The pursuit of maintaining or pursuing a reputation would compel players to increase their activity and stay in good standing, ensuring the long-term health and character of the community. 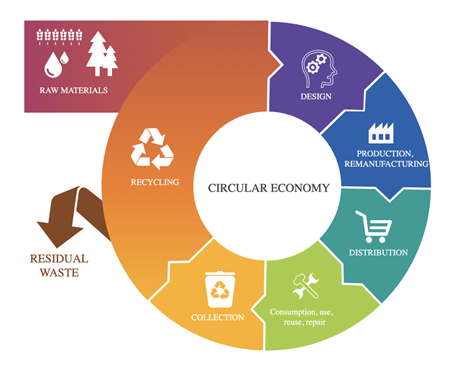 “There is no waste in nature. When a leaf falls from a tree, it feeds the forest. For billions of years, natural systems have regenerated…