Evolution of the Internet – from web1.0 to web3 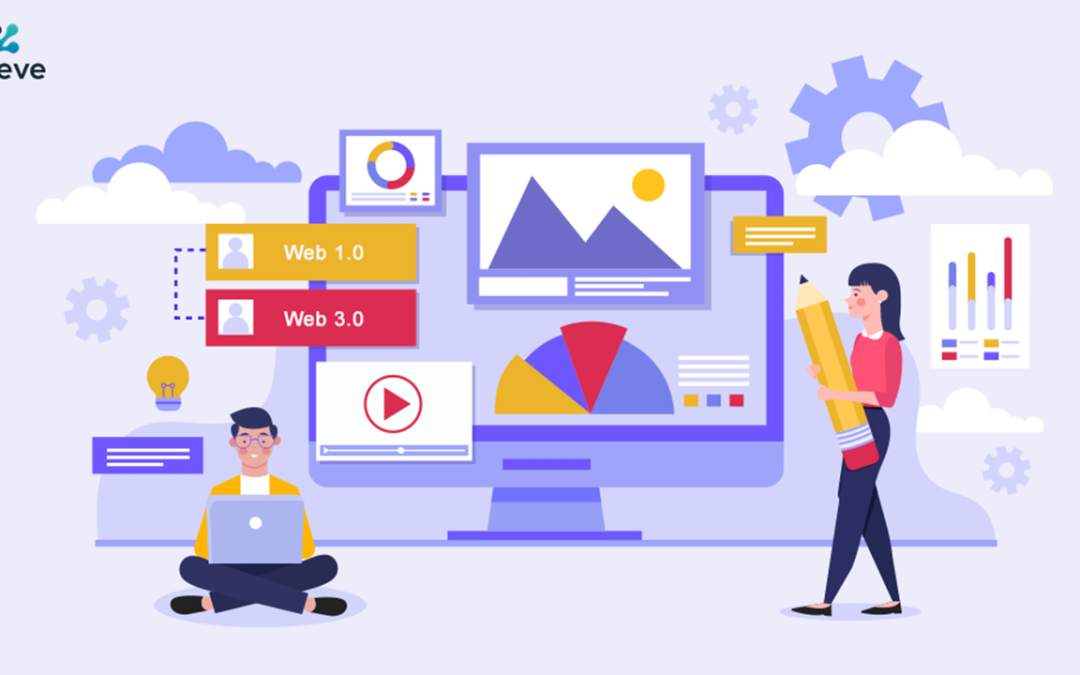 The World Wide Web is the key tool used by billions of people to distribute information, read and create it, and connect with others over the internet. The web has evolved considerably over time, and its contemporary uses are almost unrecognizable from its inception. The development of the web is often classified into three stages: Web 1.0, Web 2.0, and Web 3.0.

Web 1.0 was the very first version of the internet. Consider the read-only or syntactic web to be Web 1.0. The majority of participants were content consumers, whereas the creators were mostly web developers who produced websites with predominantly textual or visual content. Web 1.0 existed approximately between 1991 and 2004.

In Web 1.0, sites supplied static content rather than dynamic hypertext mark-up language (HTML) content. The data and content came from a static file system rather than a database, and there was limited interactivity on the web pages.

Most of us have only seen the web in its present form, which is also known as Web 2.0, the interactive read-write web, and the social web. You don’t have to be a developer to participate in the Web 2.0 creation process. Many applications are built in such a manner that anybody can create content.

Web technologies like HTML5, CSS3, and Javascript frameworks like ReactJs, AngularJs, VueJs, and others enable businesses to create new concepts that allow users to contribute more to the social web. As a consequence, since Web 2.0 is designed around people, developers just need to provide a system to empower and engage users.

When a developer or organization develops a successful app, the user experience is often exceedingly smooth, particularly as the program’s popularity rises. This is why they were able to get momentum so quickly in the first place. Many software companies were unconcerned about monetization at first. Instead, they were primarily concerned with acquiring and maintaining new customers, although they would ultimately start profiting.

However, the constraints of accepting venture capital often affect the life cycle and, ultimately, the user experience of many of the services we use today. When a company seeks venture money to build an application, for example, its investors often anticipate a return on investment in the tens or hundreds of times that they put in. This implies that, rather than following a long-term, organic development plan, the firm is typically driven down one of two paths: marketing or data sales.

More data implies more targeted marketing for several Web 2.0 businesses, including Google, Facebook, and Twitter. This leads to more clicks and, as a consequence, more ad revenue. The use and centralization of user data are critical to the operation of the web as we know and use it today. As a consequence, data breaches are fairly frequent in Web 2.0 apps. There are even websites devoted to monitoring data breaches like “have i been pwned?” and notifying you when your personal information has been compromised.

In Web 2.0, you have no control over your data or how it is kept. In reality, corporations regularly monitor and keep user data without their knowledge or consent. All of this data is then owned and managed by the companies in charge of these platforms. Furthermore, when governments feel someone is expressing a viewpoint that opposes their propaganda, servers are routinely taken down or bank accounts are seized. Using centralized servers, governments may easily intervene, control, or shut down programs.

Governments routinely meddle in banks since they are also computerized and centralized. They may, however, suspend bank accounts or limit access to money during times of extreme volatility, excessive inflation, or other political upheavals. Many of these issues will be addressed by Web 3.0, which seeks to fundamentally rethink how we build and interact with apps.

Web 3.0, also known as Semantic Web or read-write-execute, is the phase (starting in 2010) that suggests the future of the web. Artificial Intelligence (AI) and Machine Learning (ML) allow computers to evaluate data in the same manner that people do, allowing for the intelligent development and dissemination of useful information based on a user’s individual requirements.

Although there are several major differences between Web 2.0 and Web 3.0, decentralization is the defining parameter. Web 3.0 developers almost never design and deploy programmes that operate on a single server or store data in a single database (usually hosted on and managed by a single cloud provider).

Many leading companies are presently conceptualizing and developing Web3, with Ethereum standing out in terms of early user acceptance and scope. While Web3’s underlying architecture has not yet been determined, its decentralized nature is a key component of its planned design.

The Advantages of Decentralization

Web3 is envisioned as returning data ownership to end-users via decentralization. The ambition of Web3 is to construct new web protocols and infrastructure that should enable developers to build applications where users bring their own data and identity is no longer bound to any one platform.

A decentralized web is based on a peer-to-peer network that is built on a user community. Instead of a group of powerful servers, this group’s own internet-connected nodes would host websites or apps. Each website or programme is dispersed among hundreds of nodes on various devices. This procedure decreases the likelihood of a server breakdown, hackers shutting down a website, or an oppressive government seizing and/or restricting viewpoints. The decentralized web is related to the dark web, which was designed by the US government to enable individuals and journalists under repressive regimes to express themselves freely, safeguard whistleblowers, and keep users safe by maintaining their identities. The anonymity and decentralized structure of the black web also allows criminals to operate freely, which is a possibility for Web3.

The Internet Archive, as one of the world’s greatest nonprofit libraries of information and culture, including free books, music, movies, software, and websites, has been critical in ensuring that the internet stays free and open. As such, it has been one of the primary organizers of DWeb events since 2014, bringing together groups of individuals who are laying the groundwork for a decentralized web.

How Is the Decentralized Web Used Today?

Although the notion of a decentralized web has been explored for many years, the majority of the web remains centralized in reality. The Ethereum network is now the biggest community-run decentralized network, powering the cryptocurrency ether (ETH) and providing access to hundreds of decentralized apps. Decentralized applications, or Dapps, are accessible for banking, arts, collectibles (including the notorious NFTs), gaming, and technology.

The architecture of Web3 apps

Web 3.0 apps (or “DApps”) have an entirely different architecture from Web 2.0 applications.

Consider WordPress, a blogging platform that allows users to post their own content and engage with that others. It may seem easy as a web 2.0 application, but there is a lot that goes into such a platform’s design to make it all possible:

First, critical data such as users, posts, tags, comments, likes, and so on must be stored somewhere. This necessitates a database that is regularly updated.

Second, WordPress’s business logic must be defined in backend code (written in a language such as Node.js, Java, or Python). For instance, what happens when a new user registers, creates a new blog, or comments on someone else’s blog?

Third, WordPress’s UI logic must be defined in frontend code (usually written in JavaScript, HTML, and CSS). What does the site look like and what happens when a user interacts with each piece on the page?

In contrast to Web 2.0 apps such as Medium, Web 3.0 removes the middleman. There is no centralized database to hold the application state, and no centralized webserver to house backend logic.

Instead, you may use blockchain to develop applications on a decentralized state system maintained by anonymous internet nodes.  Blockchains are state machines that are created with a genesis state and have extremely rigorous rules (i.e., consensus) governing how that state may shift.

Even better, no one entity controls this decentralized state machine; it is maintained cooperatively by everyone in the network.

What about a backup server? Instead of controlling the backend of WordPress, Web 3.0 allows you to develop smart contracts that specify the logic of your apps and deploy them into the decentralized state machine. This implies that everyone who wants to create a blockchain application must deploy their code on this common state machine. The front end, mostly, remains the same. Let us try to dive deeper into the components of a decentralized app:

The Ethereum blockchain is often referred to as a “global computer.” This is due to the fact that it is a globally accessible, deterministic state machine that is maintained by a peer-to-peer network of nodes. The rules of consensus that the peers in the network obey control state changes on this state machine.

In other words, it’s meant to be a state machine that everyone on the planet can access and write to. As a consequence, this computer is owned jointly by everyone in the network rather than by any one corporation.

Another thing to keep in mind is that data can only be written to the Ethereum blockchain – it can never be updated.

A smart contract is software that runs on the Ethereum blockchain and specifies the reasoning behind the network’s state changes. Smart contracts are created in high-level programming languages like Solidity or Vyper.

Because smart contract code is kept on the Ethereum blockchain, everyone on the network may view the application logic of all smart contracts.

The Ethereum Virtual Machine follows, which executes the logic expressed in smart contracts and handles state changes that occur on this globally accessible state machine.

Finally, there is the front end. It defines the UI logic, as previously stated, but it also interacts with the application logic described in smart contracts.

Web3 is the Future

Web3’s future seems to be bright. There are several intriguing initiatives and innovations ongoing that will make this technology more user-friendly and accessible to everyone. We should expect to see a lot more innovation in this area over the next five years, revolutionizing how we use the internet. With further advancements in blockchain technology, we may soon see Web3 utilized for everything from online commerce to voting and governance. Polygon hosts some of the biggest Web3 platforms and developers in the industry, from decentralized finance (DeFi) protocols such as lending platform Aave to luxury brands company Dolce & Gabbana, and even NFT marketplaces including OpenSea and Mark Cuban’s Lazy.com.