Blockchain has the potential to change how users, enterprises, and government... View more 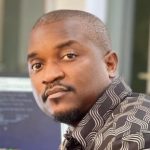